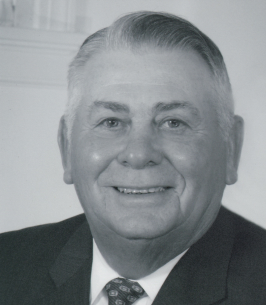 Mr. William E. “Bill” Blalock, age 87, of Baskerville, VA, lifelong farmer and dairyman, passed away on Saturday, May 1, 2021 at his home. He is survived by his high school sweetheart and devoted wife of 65 years, Doma Ferguson Blalock; cherished daughter, Scarlett B. Courter and husband Carlton, and beloved grandson, James Carlton “Carl” Courter, IV, of whom he was most proud.

In 1955, Bill graduated from VPI and SU with a Bachelor of Science degree in General Agriculture. While at Virginia Tech, he wrestled on the college team, was in the Corp of Cadets and was a member of the infamous Kangaroo Rustlers.

After graduation, Bill came home to the family farm, Park Forest, where he spent the rest of his life as a dairy and tobacco farmer. He enjoyed bird hunting, his trademark cigar and most of all working to improve his beloved low grounds along the river and was still operating his bulldozer at 83.

Bill was a natural and respected leader who served his country, his community, his church and his fellow man. In 1956, he was drafted into the US Army where he served 2 years. He was a conservative voice on the Mecklenburg County Board of Supervisors, serving 47 years and having the distinction of being the longest serving supervisor in the State of Virginia. He was the first independent ever elected to office in Mecklenburg County. Bill had a voice and countenance that commanded attention and he could be feisty! He worked hard to keep county taxes to a minimum.

Bill was a lifelong member of Bethany Baptist Church where he served on the board of deacons, sang in the choir, served as clerk and trustee and as the substitute Sunday school teacher for his adult class.

From infancy, Bill lived his entire life at Park Forest Farm, the home place of his parents and grandparents. He never wanted to be anything but a farmer/dairyman and he lived long enough to master both. He always took time to help his fellow man and was known to be generous to a fault! He would always say, “If I’ve helped just one somebody along the way, it’s been worth it.”

Bill was predeceased by his parents, H. Guy Blalock and Janie Elam Blalock and two brothers, Dr. Horace G. Blalock, Jr. and T. D. “Dan” Blalock. He is survived by his two sisters, Jane B. Drumwright and Martha B. Michael.

A graveside funeral service will be conducted at 2pm, Tuesday, May 4, 2021 at Bethany Baptist Church Cemetery. Friends may pay their respects on Monday, May 3 from 8:30 until 4:30 at Farrar Funeral Home and on Tuesday until 11am. The family requests memorial considerations in his memory be directed to Bethany Baptist Church, P. O. Box 119, Baskerville, VA 23915. Online condolences may be shared at www.farrarfuneralhome.net. Farrar Funeral Home of South Hill is serving the Blalock family.

This obituary is protected by copyright by Farrar Funeral Home. Proudly Serving the Communities of Bracey, Boydton, Brodnax, LaCrosse, Alberta, and South Hill. Farrar Funeral Home is located in the state of Virginia, United States.

All rights reserved. This obituary is also archived at obittree.com